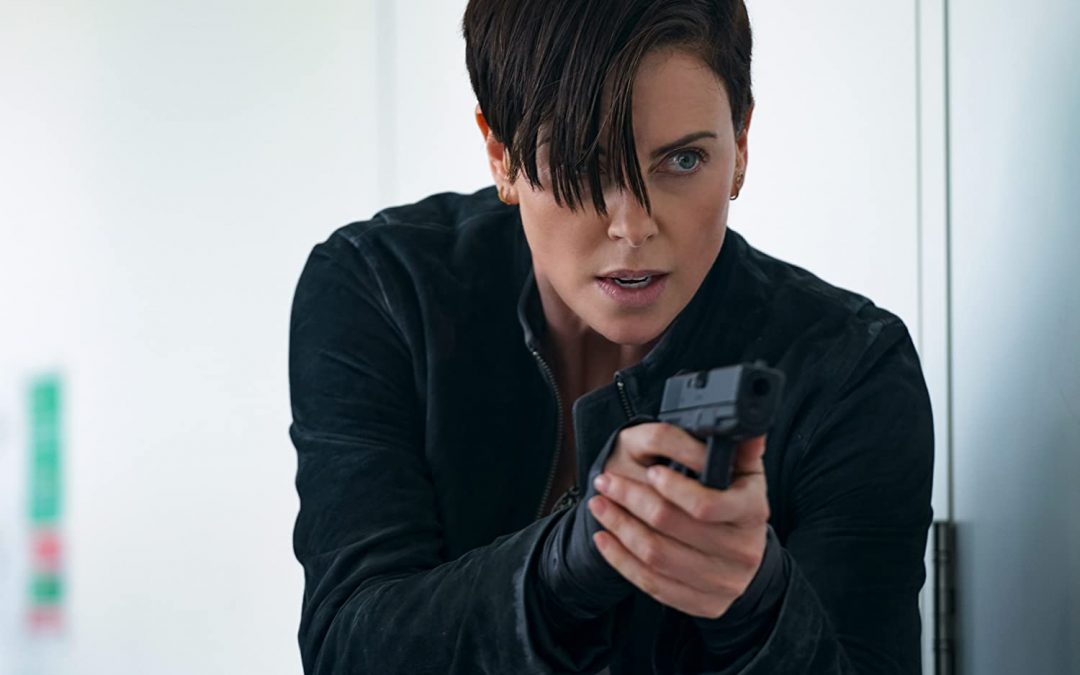 Since Netflix released ‘The Old Guard’, I have come across several articles praising the gay romance in the action movie . Benjamin Lee’s piece on The Guardian, for example, has been insightful as it provides not only a queer perspective on this particular film, but on the Hollywood industry in general. Although this is not the first queer couple to appear not screen, we finally see an openly gay couple playing superheroes in an action series. Moreover, I would add that is the romance in the movie. It is the only one, the only hints at sexuality in the whole film altogether. How does this blend in with overall gender roles in the story? Let’s dig deeper. 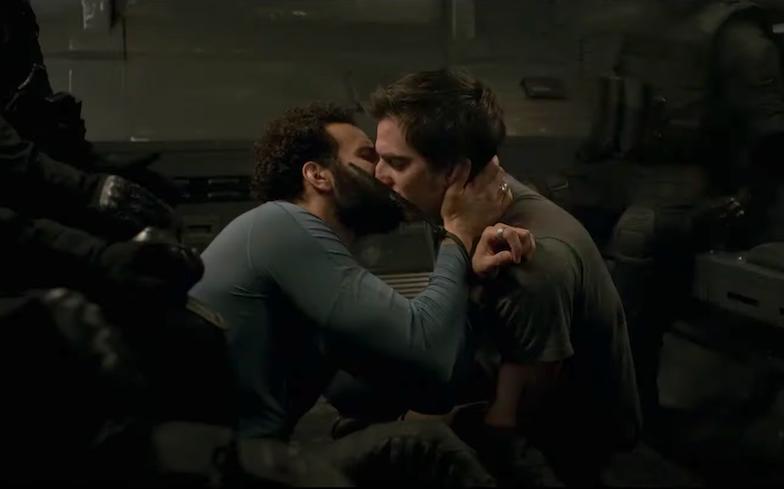 Like in many other action movies, here most of the people we see are men, except for  the two main characters, who are both women. So we have two women surrounded by men, two strong women warriors. Their strength, fighting skills, resilience, and, in the case of Andy, leadership, are the qualities that are most emphasised in them, and that characterise them the most. There are two main depictions of strong women characters that come across in popular culture. The most frequent is strong women shown as beautiful, sexy and attractive, and often use their seductive influence over men, even if they are warriors, too. We are constantly reminded of the significance of their beauty, appearance, and sexuality, not only by costumes and visual effects that show as much as possible of their bodies, but also of direct remarks from other characters. We see none of this in ‘The Old Guard’. Secondly, another tendency is for strong women to be represented as very similar to their male counterparts. They are often part of a men’s group and behave in similar ways, share the same values and qualities, and are at ease among them, though without sexual tension. This is the case of Andy and Nile here.

Not surprisingly for an action movie, there is plenty of bloodshed in ‘The Old Guard’. The victims are pretty much all killed by our heroes – and they are all men. Yes, interestingly, in action movies we are told who the ‘bad guys’ are, but it is the good guys that do most of the violence, so that, as spectators, we can enjoy violence as something sexy and spectacular. As usual, we are not made to feel much for the people who get slaughtered and the ‘collateral damage’ in action scenes. We feel nothing for them, similarly to when we watch movies where the bad guys are not human, like zoombies, demons, or monsters.

In scenes like these, violence looks simply epic and exciting. It tells us how powerful our hero is, so that we love it. We already know from the music that she is completely in power, and she is going to show them. This is a typical example of what I call ‘sexy violence’, where the ‘epic’ of the battle is made not only through the fight scene choreography, but also the comments of the shocked spectators. In this case, the shocked and impressed audience, are both the bad guys who figure out they need to retreat, and the dialogue between Nile and Booker. While Nile who is new and has never seen Andy in action is anxious, Booker is relaxed and waits for the ‘big signal’ with confidence. At the end, when Nile sees the results of the encounter, Booker tells that Andy know ‘more ways to kill than entire armies will ever learn.’

So yes, we see a lot of dead bodies (do they never even cry in pain?), and it feels nothing but glorious. Normal for an action movie, right? Yet, the story does try to teach us a lessons about violence, morality, and justice. The Immortals are on a mission to… do good things for the world? Bring peace maybe? Well, the heroic mission does not seem to be all that clear to them, but Andy does feel that ‘they have not done enough’, and this is part of her emotional burden that we feel throughout the movie.

The conversation on violence and morality develops mostly through Andy and Nile’s relationship. Nile is introduced as a good American soldier who gives chocolates and lollies to poor Afghan children. The Afghanistan sequence is the only one in the film in which we see other women, and also see emotion and regret when Nile kills a man for the first time. When Nile meets Andy, she questions her ways. It’s like, ‘shall I really join this woman? Am I going to become the next ‘her’? Are you the ‘good’ guys? This storyline becomes explicit when Nile temporarily refuses to follow Andy in the rescue mission and directly questions Andy’s for the brutal massacres. This is the point where she is to make a choice, a moral choice. It seems like accepting violence and, at the same time, leaving behind mortal family, love, and relationships are part of the inevitable sacrifice of becoming an Immortal warrior. And of course, this is the decision she makes. Suddenly she is one of them. She no longer blinks when it comes to kill big, Andy’s style. 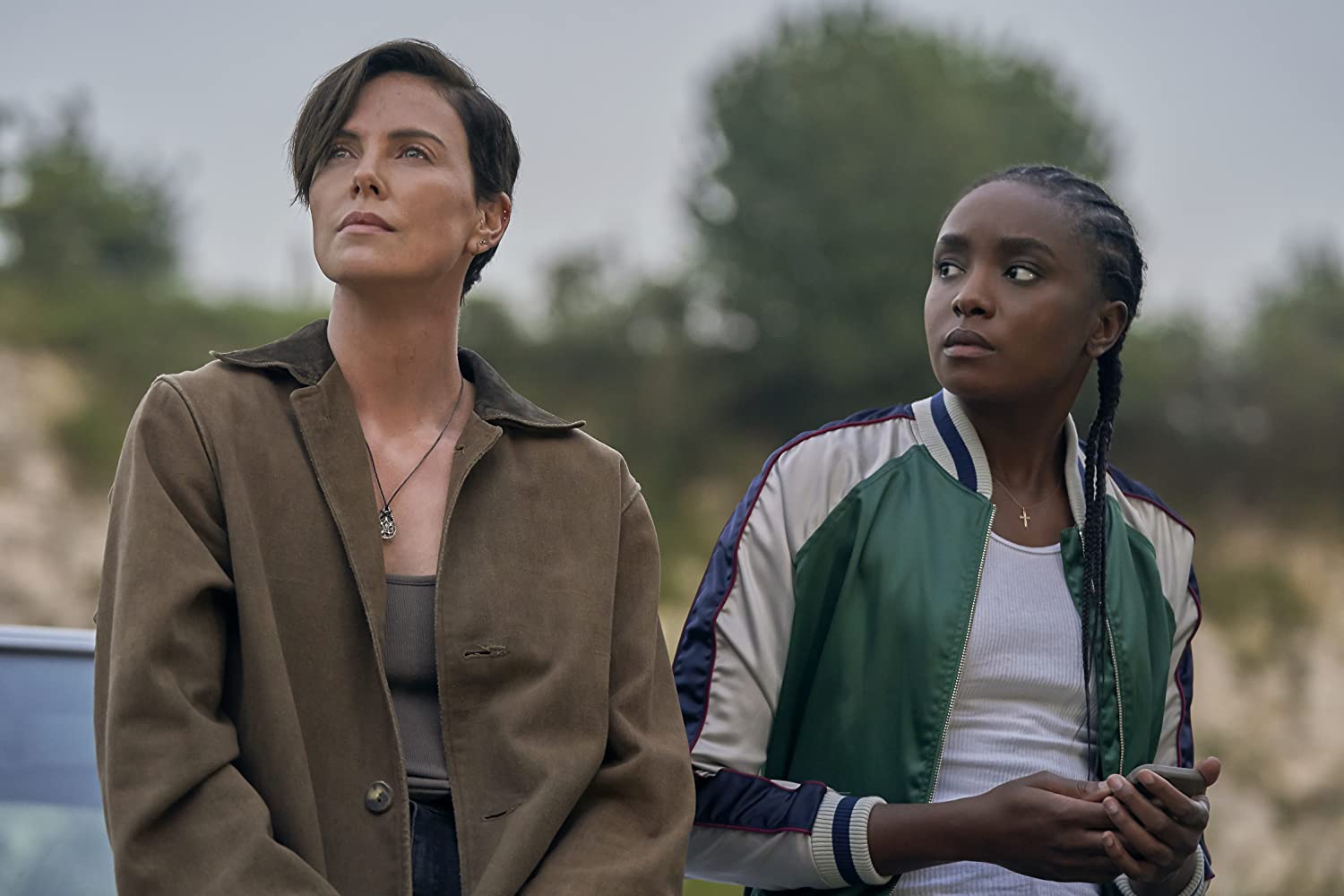 The message around the necessity of embracing violence is central to story and character development, and it’s compelling because not only it gives us a taste of power, but because it is emotional. And heroes are not usually so compelling if they do not have this emotional burden, are they? Choosing blood means leaving behind your life and affections, but at the same time it is also what brings the team together. Even though superhero teams have purposes such as ‘saving the world’, their love and loyalty for the inner circle is what matters the most. We are not really made to care about anyone else as viewers. We get to love the team as a group lead by a leader who would sacrifice everything for them. Sure, Andy’s grief when she feels that she has not fulfilled  the purpose of ‘saving the world’ is also emotional, but at the end the story is not really about saving the world, but saving the team – and accidentally finding out that you did some good for the world after all. In fact, even it is not so clear what the Immortal’s strategy for saving the world exactly is.  It could be just, me, but I would start by systematically researching systemic violence… there would be plenty of time to do it!

This review is part of a project on the representation of violence in popular culture.

Don't want to miss any of our blog posts? Get them straight to your mailbox!

You have Successfully Subscribed!